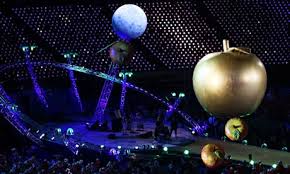 As I was watching the Paralympic opening ceremony, which was wonderful, the commentator told us that the giant apple alluded to Isaac Newton and the scientific enlightenment. My mind went back to my first year at secondary school (a very long time ago) and something else the apple represents, the forbidden fruit in Genesis.

I was not a very religious child. Like most kids then I was familiar with “Bible Stories” and never really thought about whether they were true or not, I just accepted them. At some point during my eleventh year though I decided that I should read the Bible seriously so I decided to start at the beginning, Genesis.

It starts with the arrival of the Serpent. God has already told Adam and Eve not to eat the fruit of “the tree of life also in the midst of the garden, and the tree of knowledge of good and evil.” They are told that, if they do, “thou shalt surely die.” The Serpent contradicts God and says that they won’t die. He says “Ye shall not surely die: For God doth know that in the day ye eat thereof, then your eyes shall be opened, and ye shall be as gods, knowing good and evil.”

Well Eve decides to eat some, and also gives some to Adam. They don’t die, they become suddenly aware of their own sexuality, and cover themselves with fig leaves. God returns and is not best pleased. He banishes Adam and Eve from the garden saying “Behold, the man is become as one of us, to know good and evil: and now, lest he put forth his hand, and take also of the tree of life, and eat, and live forever.”Now this all puzzled me, if you look through Biblical Literalist eyes you are forced to draw some conclusions

That was enough for me really.

I thought, at the time, that I had made an important discovery. Unfortunately my RE teacher disagreed and I became a victim of his favourite punishment, standing at the front of the class, arms outstretched, with a bible on each hand. You can probably guess what this punishment was called.

Looking back on this as I grew older I saw that the story is full of metaphor, but none of it is flattering to God, who comes out as an autocratic dictator. I also gradually realised that for some Religious people that’s fine.

They actually want an autocratic dictator for a God!

So I guess we are both happy, they get their dictator God and I find a proud metaphor for the enlightenment (or just for growing up) in the very heart of their holy book.

So here’s to Eve.

And to Adam and the Serpent. Come what may I’m on their side, and I think the people behind the Paralympic opening ceremony are too.

This entry was posted in Uncategorized. Bookmark the permalink.

1 Response to Atheist reflections on apples, genesis,and growing up

2B3 a Freethinking Space

Laurie's Blog - may contain science. And lots of other stuff.

Inner Workings of My Mind

Debates where science and values meet in the middle

Oh you know. History, archaeology and that sort of thing.

The Baroness Warsi
The Blog of The Re-Enlightenment

Free speech and free expression are the only weapons I have against bad ideas. Please don’t tell me I can’t use them.

Humanist, rationalist, concerned that humanity may turn it's back on the enlightenment. Grumpy old man who hasn't got his own TV programme - YET.

Second Thoughts for the Day

Humanist, rationalist, concerned that humanity may turn it's back on the enlightenment. Grumpy old man who hasn't got his own TV programme - YET.

The latest news on WordPress.com and the WordPress community.